Now, something about the HD44780 screen. First, this screen compared with the cheapest chinese HD44780-compatible screen:

As you can see, they differ not only in sizes, but also that the header is not at the right place. What a shame =( 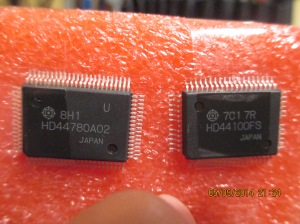 So – I’ve desoldered original ICs and soldered the new ones on the board. 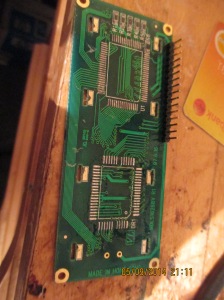 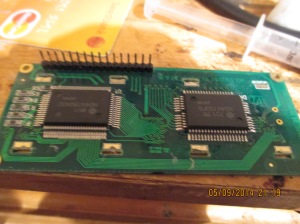 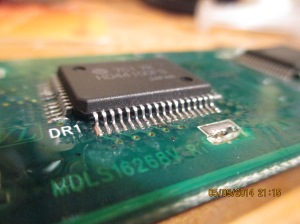 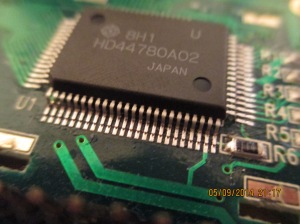 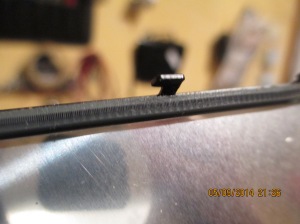 Still didn’t work! Why? Amused, I connected the display to the payphone… Only to see it working. 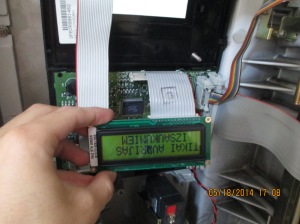 What was it? I’ve had a guess, and I guessed it right. 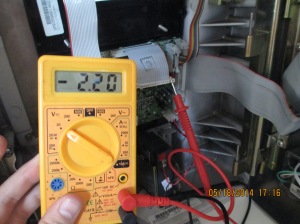 Seems that my HD44780 screen needs negative contrast voltage in order to display something. Couldn’t have known that earlier – there isn’t much information on this on the Web, and I can see why – it’s an extended temperature range screen, they aren’t that popular. I’ll need to make a negative charge pump in order to power it… BTW, would be a nice idea to see just how much current it needs on the contrast line – to understand which charge pump is needed. If it’s under 0,5 A, I can use a well-known 7660 IC. If not, well, that’s sad – that’d mean I’d need somebody to help.

Some info about this phenomena:
–First clue I’ve found that helped me understand;
–Actual screen modification that provides some info on how and why;
–Just a bunch of photos of different displays =)

Also, I’ve received DTMF generators (datasheet) and decoders (datasheet)… But I haven’t got the crystals for them yet – they’re to arrive soon =( I’ve made breakout boards for both, but, as you can see, they lack some passive components and crystals.

(Left – a ready board, center – DTMF decoder board w/o crystal and passive elements, right – DTMF generator board w/o crystal)
In order to understand my breakout circuit, just look at the datasheets, there’s a section with a sample usage. The breakout board with a crystal and IC is MT8870 DTMF decoder board – it’s basically the same IC, just older and from another manufacturer, but pinout and circuit are the same. I’ve made this board around 3-4 years before =) That might be one of the reasons it doesn’t work so well – my soldering wasn’t so good back then.
I also plan on making breakouts in Eagle CAD, just after I test these hand-made boards. I’ll share them here – along with some more useful breakouts I hope I’ll finally get an opportunity to test.

It’s also a Chinese version – so it’s not amusing it doesn’t work with the popular I2C LCD backpack Arduino libraries. Why? Seems that pin mapping between I2C-GPIO IC that’s on the backpack board and LCD header on the same board just isn’t the same as in popular versions of this kind of backpack. We’re left to guess just why they’d manufacture a backpack like that, yet it isn’t the prettiest thing to do. At least they’ve supplied Arduino libraries and example code… Which doesn’t compile in my Arduino IDE, and I don’t even want to know why ’cause I sure don’t want to translate code comments from Chinese. I suppose modifying some library that is already working just to have the bits of data sent in different order won’t be any hard. Also, it has a backlight control pin connected to the I2C-GPIO chip, so that’s a bonus =)

I plan on doing the next update when I’ll receive crystals and complete my breakout boards. I’ll probably have Eagle-made breakout boards and libraries for DTMF chips to share by then, too =) Not to forget Arduino libraries.