Yesterday, I decided to install Replicant on a Samsung Galaxy S1 ( i9000, also referred to as galaxysmtd in the builds ). However, it already had some version of Cyanogen Mod on it – apparently, not the one that was installed. Also, I had to blacklist some drivers for heimdall tool to work on my Linux laptop.

When flashing recovery – if you connect a Galaxy S1 in download mode to a Linux laptop, it’ll present itself as a serial port, then the cdc_acm driver will load and, apparently, send some AT commands (to check if the device is a modem), which crashes something in the download mode code, apparently, so it stops responding to the heimdall tool and there’s always this “Protocol initialization failed” message, and if you get further, there are still problems

To solve this, I added two lines: “blacklist cdc_acm” and “blacklist visor” to an /etc/modprobe.d/blacklist.conf file, and then rebooted. I don’t know if that could be solved without rebooting, only after reboot it seemed to be solved for me.

After this, I could easily flash Replicant-provided recovery image to the phone. However, it’d give this error all the time: 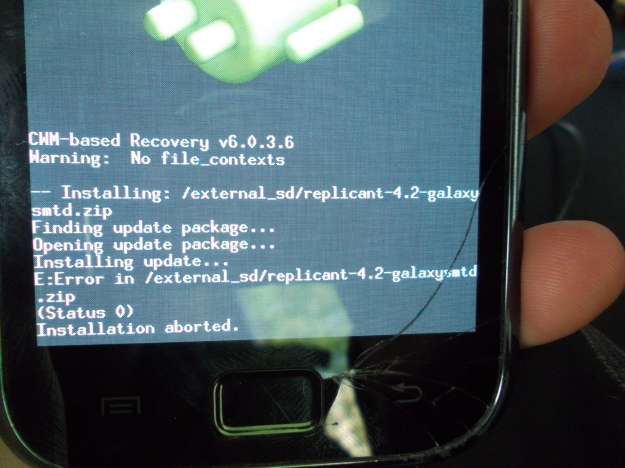 “Error in replicant-4.2-galaxysmtd.zip (Status 0)”. Not the most informative error message. Basically, the scripts returns “ran normally” but the install doesn’t continue. I opened the .zip and saw the updater.sh there, which ought to have been the file causing that error. After debugging the script execution path with some ui_print macros, I found a section in the middle of the script (in the section for “new mtd layouts” or something) that would stop the process, but exit 0 (erroneously assuming something IIRC).  I removed that section, and it went further – but got stuck on some thing that would “exit 7”. I removed that exit statement too, and Replicant finally got installed. TODO: understand what that “exit 7” thing was complaining about.

However, Replicant is running great now, so all is well =)